Throughout the city, the Class 3A champs continue to be the talk of the town, with congratulatory messages coming in from Pirates old and new, present and former Tree City residents and even members of surrounding communities. But by and large, much of the praise for the team’s accomplishment and the subsequent celebratory atmosphere experienced throughout the city over the course of the last week, stem not only from the athletic prowess of a group of talented young men, but also the way in which they conduct themselves off the court.

Daily News reader Anne Schmidt, a veteran substitute teacher at GCHS, described the unique solidarity and friendship among the young men in an email Thursday.

“The team is a unit of one. If one is there, they all are there,” Schmidt wrote. She also took time to share a humorous story about one of the players.

“Riley Billieu asked me one day to make him a hat. He knew just how he wanted it. I finished his hat and off he went to class wearing this silly hat. Needless to say, here came the rest of the boys wanting theirs.”

Schmidt added how much she has enjoyed getting to know the young members of the basketball team.

“It was fun and an exciting experience to be a part of such an elite group of young men,” she said.

“Elite” may be just the word to describe this team, as this Pirate crew’s unprecedented success has led to Greensburg alums tipping their hats toward an achievement they themselves might have once hoped to reach.

“Thanks for accomplishing something we were unable to do in our day,” wrote Nan and Rich Richardson. “It was a great ride.”

The Richardson's emailed the Daily News Wednesday night, offering their congratulations to the players and coaching staff. Rich was a basketball player during his high school days, while Nan was a cheerleader. 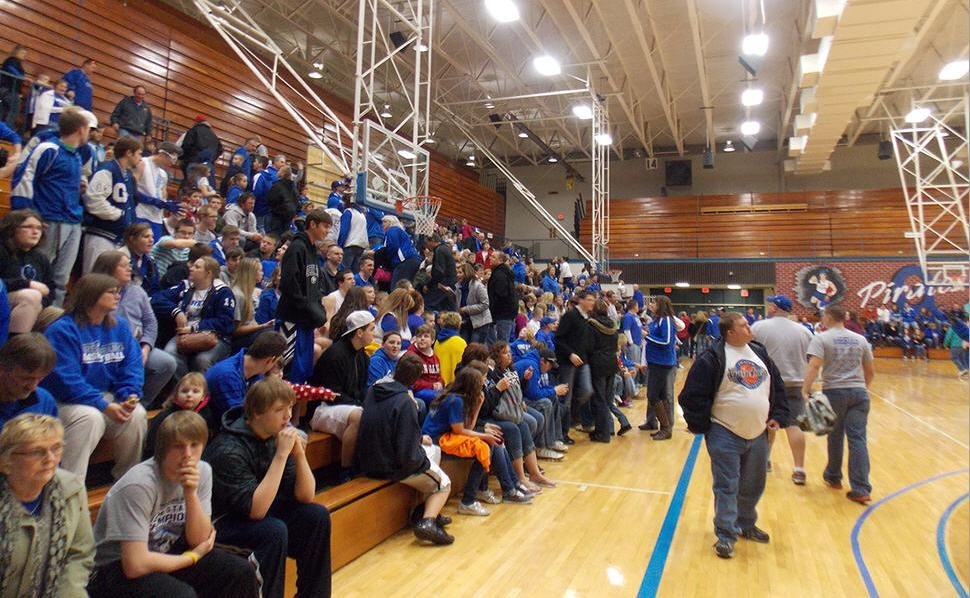 Fans wouldn’t be denied Saturday night, as they gathered at the GCHS gymnasium for an unplanned, impromptu pep rally for the Class 3A State Champion Greensburg Pirates. An "official" community
pep rally will be held at 6 p.m. April 3.

The accomplishment was also something in which Greensburg Community Schools Superintendent Tom Hunter has taken great pride.

A 1976 graduate of GCHS Hunter, who attended Saturday night’s championship victory, described the win as “pretty much a dream come true.”

“It’s extremely encouraging to see what level our kids can compete at when they set a goal and work their hardest to achieve,” Hunter said to Daily News staff writer Rob Cox Wednesday. “I commend our players for the job they did and for achieving their goal.”

Hunter also called the players “great ambassadors of Greensburg,” a sentiment echoed loud and clear by many others in Greensburg this week.

A vocal proponent of the Pirates, Emsweller stated the victory has “really brought this community closer together.”

“It’s what every school dreams about, and there’s a whole lot of pride because of this,” he continued. “No one can ever take it away from them.”

Across social media sites such as Facebook and Twitter, the Pirate faithful have joined together in offering praise for the team and its staff.

Greensburg resident Matt Miller, a 1992 GCHS grad, wrote a congratulatory message to the 2012-2013 Pirates on the Daily News’ Facebook page earlier this week.

“Congratulations to the Pirates for a tremendous year and much success next year and in the years to come,” wrote Miller. “The groundwork has been laid and it is time to continue building on these successes.”

Greensburg Athletic Director Bill Edwards told the Daily News team members will be recognized in a special ceremony at City Hall Monday, April 1, during the monthly Greensburg Common Council meeting. That meeting begins at 7 p.m. Two days later, the victorious Pirates will be honored with a parade around the city which will lead into (an undoubtedly raucous) community championship celebration in the GCHS gymnasium.

The next day, at 7:30 a.m. April 4, the boys will be honored in the Governor’s Office at the Statehouse in Indianapolis.

Clearly, much more jubilation lies ahead before Greensburg residents will be ready to put this basketball season behind them.

“We all share in this accomplishment,” Edwards told the Daily News. “Our kids have played before tremendous support all season long, so this is truly an accomplishment for all of Decatur County to share.”