The Pirates overcame a 12-point second-half deficit to claim the Class 3A title in overtime, 73-70 over Fort Wayne Concordia at Bankers Life Fieldhouse in Indianapolis. 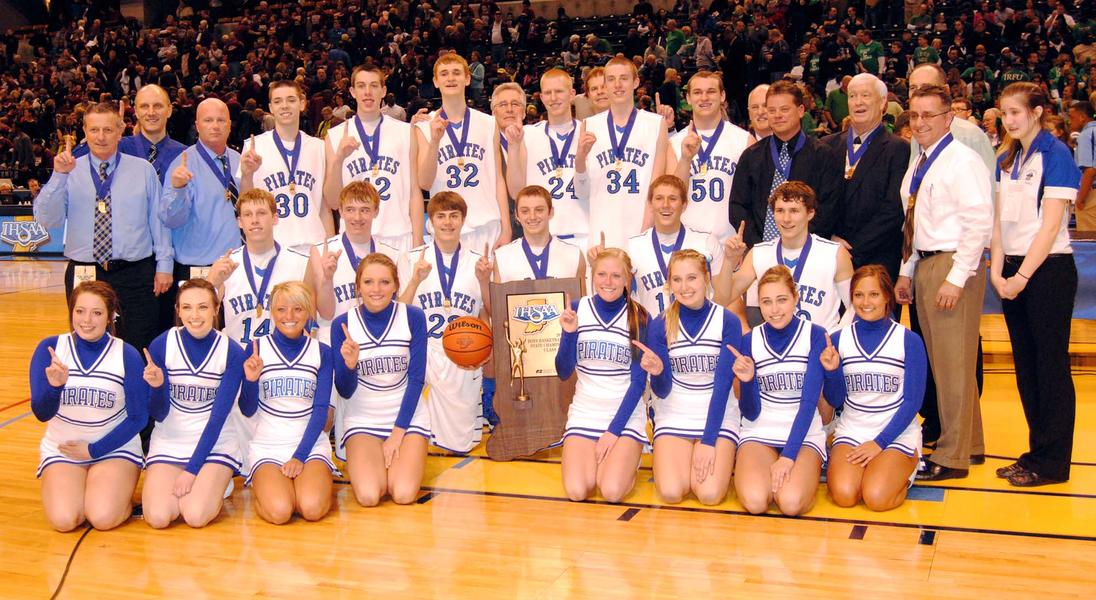 
Greensburg’s last four opponents in the tournament had not lost to a 3A team before facing the Pirates. Those teams finished combined 43-4 (.915) in 3A, with all four losses to Greensburg, and a combined 90-15 (.867) overall.

The victory also meant that Greensburg (26-1) completes the basketball season with the best winning percentage (.963) in the state, regardless of class affiliation, and the most victories.

Saturday's lengthened battle proved that, literally, a game is not over until the final buzzer sounds.

The Concordia Cadets jumped out to a 5-0 lead until Pirate sophomore Ryan Welage put Greensburg on the board. Junior Bryant McIntosh pulled his team to within one with a steal and a layup, making it 5-4.

The Pirates trailed by one on two more occasions, but a Welage jumper tied the game for the first time at 10-all with 1:11 left in the first quarter. Senior Brandon Webb, though, ended the opening period with a layup and a 12-10 edge.

The Cadets outscored Greensburg 19-11 in the second quarter, led by seniors Marq Rogers and Brian Gremaux with five points apiece. The Pirates trailed 31-21 at halftime.

Concordia junior C.J. McCall had three fouls in the first half, while three Pirates had two fouls apiece.

Junior Sean Sellers came alive in the third quarter. The Pirates pulled to within eight twice on two early pairs of Sellers free throws, but Concordia’s lead fluctuated between five and 10 points throughout the quarter. McIntosh scored six straight points, and Sellers made it 49-44 before the third stop.

Greensburg’s biggest deficit in the fourth quarter was seven. The teams exchanged baskets twice in the first two minutes, and Greensburg’s defense tightened up as Sellers grabbed two quick defensive rebounds. The score stayed at 53-48 for nearly two minutes until a Welage shot block and defensive board by McIntosh set up a McIntosh layup, making it 53-50 with 4:53 left.

Gremaux put the Cadets back up by five, but Sellers answered with another pair at the stripe after McCall picked up his fourth foul.

The most Greensburg trailed the rest of the game was by four at 58-54. With 1:33 to go, a defensive board by junior Collin Rigney was sandwiched by scores from Sellers and McIntosh. Suddenly, the Pirates found themselves down by just two.

Another Rigney board set up McIntosh’s game-tying layup at the 1:27 mark, but Sellers fouled out with 48 seconds left. Senior Thomas Starks hit one free throw to make it 59-58.

McCall then gave his team its largest lead the rest of the way, hitting a pair with 33 seconds to go.

“I wasn’t really upset. I knew that we’d keep fighting,” said Sellers of missing the final five minutes of the game. “Bryant hit that three to tie it up, and Welage kept rebounding and sticking with it. I knew if we kept fighting, we’d have a pretty good chance to win.”

McIntosh buried a triple to tie the game for just the second time, 61-all. On the ensuing possession, senior Tyler Burcham came up with a big steal for Greensburg, but the Pirates turned it over after a timeout. However, Rogers missed a potential game-winning three at the buzzer.

The lead changed five times in the extra session. Following a Starks basket, McIntosh forced a tie with two foul shots. Moments later, Rogers tipped in a deuce before two more McIntosh free throws tied it again at 65-all.

Welage gave Greensburg its first lead of the game with 2:20 left, making the front end of a trip at the line.

McCall’s dunk, then a layup, gave FWC its last two leads of the game.

As he did just minutes earlier, McIntosh hit a jumper that proved to be the game-winner, 70-69 with 1:09 left. Welage was fouled grabbing an offensive rebound, and made it 71-69 on the back end of a pair with 42 seconds remaining.

Senior Ryan Gross kept it suspenseful with a free throw, 71-70, but a Rigney layup with 0:22 left provided the final margin.

Still with a chance to tie, senior Thomas Starks attempted a triple that hit iron. Greensburg, though, was unable to finish off the Cadets. A turnover with five seconds left gave FWC one more chance. However, McIntosh rebounded another long attempt and the Pirates were finally able to celebrate.

Head coach Stacy Meyer, winning his first career state title after making it to the final with Southwestern (Shelby) in 2003, put the recipe for the win in simple terms.

“We get down 10 at half, but these guys never quit,” he said. “Guys make plays that have made plays all year, and we just got enough defensive stops.”

McIntosh led all scorers with 25 points, adding a team-high four assists in 36 minutes. He shot 6-for-6 from the foul line. Sellers scored 19, including a game-high 12 rebounds and 11-for-11 from the line in 29 minutes. Welage followed with 16, including four rebounds in 36 minutes. Rigney scored eight, including a pair of triples and five rebounds in 32 minutes. Holdsworth scored three points. He tallied three assists and one triple in 31 minutes. Burcham scored two and added one assist and a key steal in his 14 minutes played. Senior Shane Ploeger chipped in two minutes off the bench.