Indianapolis — With their March 23 victory in the IHSAA Class 3A State Championship less than two-weeks old, the Greensburg Pirates Boys Basketball team continued basking in the limelight Thursday morning, this time with official recognition on the floor of the Indiana House of Representatives. 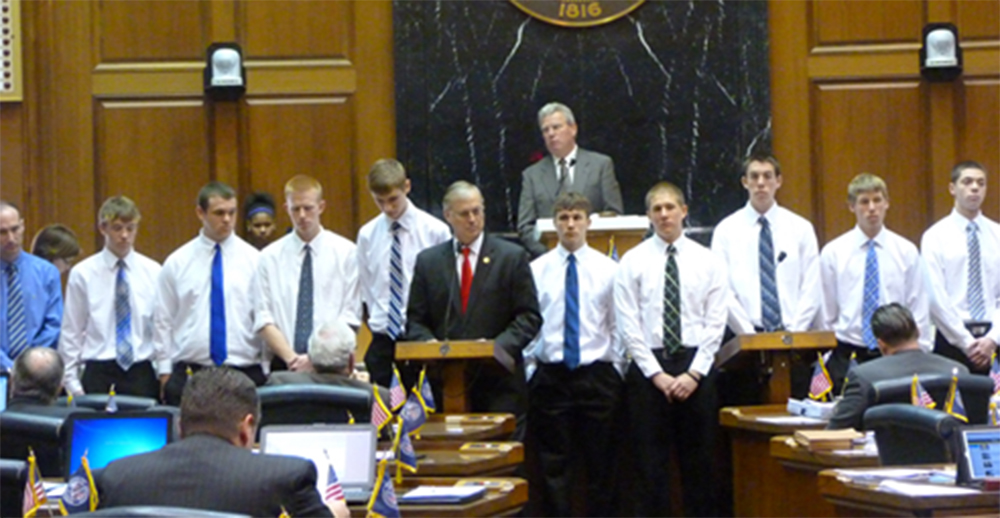 The Class 3A boys basketball champion Greensburg Pirates were honored at the Indiana Statehouse Thursday.

The resolution, presented by State Representatives Randy Frye (R-Greensburg) and Cindy Ziemke (R-Batesville), notes that the Pirates forced the game into overtime despite trailing by 12 points in the second half and despite the fact that the team’s leading scorer, Sean Sellers, fouled out with 48.2 seconds left in regulation.

More, the resolution further notes, the Pirates didn’t take a lead in the game until the 2:20-remaining mark in overtime.

With only 22 seconds remaining in the game, Rigney scored the “bucket that gave Greensburg its 73-70 edge,” while McIntosh, Welage and Rigney “combined for 12 points in overtime.” Sellers hit 11 of 11 free-throws for the game, thus establishing “a new individual record with a perfect 100 percent free-throw average.”

The resolution also commemorates the victory as “the first state championship in team competition in the history of Greensburg High School,” and the fact that, with a 26-1 season record, the team finished the season “with the best winning percentage and most victories in the state, regardless of class affiliation.”

“The second half of that game was absolutely incredible,” Frye said from the House floor. “Despite being down big at halftime, the team was never out. They never gave up, and they played until the final whistle. These young men showed resilience and maturity, far beyond their years.”

Added Ziemke: “As varsity basketball players in Greensburg, these young men commit to a lifestyle of effort, sacrifice and determination. They prioritize faith, family, school and basketball, in that order. They are class acts in a class program.”

The resolution passed the House Floor unanimously and now becomes a permanent part of state record.